Be the first to hear the two new tracks and see them performed as they were recorded live in my home studio and living room, plus get the full resolution audio downloads for free! 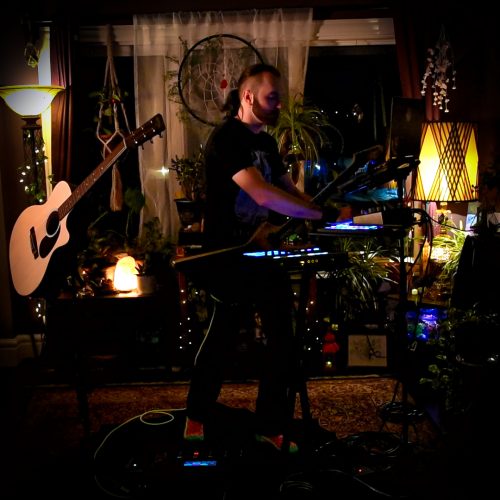 “Copacetic Live” officially hits stores and streaming platforms on 2.15.21, but because my giddiness far outruns my patience, I want you to be the first to hear the new two-track, er, single? That kinda contradicts itself… double? Eh, whatever.

I’d kicked off the year by spontaneously deciding to record a live performance video of one of my favorite tracks to play: “Copacetic“. The original studio version thereof was featured on the debut 2018 Alyag EP, Recreational Schizophrenia, which had released that August, but the tune itself was written and recorded in January, thereby making this particular release a third anniversary celebration of sorts.

With the aid of my beloved copilot (and occasional album art designer) Becca, I’d rearranged our living room into a makeshift stage, and rigged up a somewhat revised iteration of the live rig I’d employed in the early stages of the Alyag project; consisting of my Ableton-equipped laptop, two guitars (acoustic and electric), the Maschine+ as a sampler / synth, and a Launchpad MIDI controller. The track flows (and, at times, frantically swaps) ‘tweenst these instruments, which is ultimately part of why it’s so damned fun to perform live.

As well, amidst preparing the session and setting everything up, I’d opted to document the entire process — from opening a blank project in Ableton and importing the track stems (later deciding which parts to mute and which to keep running as backing tracks), to time lapses of the living room set-up, recording, and later mixing and mastering the finished audio. There’s even a break for pie along the way (because, uh, pie).

The following day, while editing the video components, and figuring the aforementioned mini-doc would need a backing soundtrack, it’d struck me to record an alternative, acoustic-only version of the tune… and so I did, accompanying it further with another playthrough video.

That’s the back story.

So now, while I certainly aim to share the actual performance video on the official release date in February, the two sister videos will remain exclusive to my mailing list members (and hopefully you!), never to be seen elsewise. That’s because, aside from the goals of writing/recording/producing and releasing a helluva lot more music this year, my other tantamount goal is to reward my closest peers — those who’ve opted to follow my creative antics a tad closer than most — with exclusive bonus content: behind-the-scenes videos detailing each song’s creation process, stories and inspirations behind the music, alternate versions, unreleased demos and remixes, free full-resolution track downloads, and much, much more.

And the best part? It’s all free.

See, the reality of being a musician in the era of streaming is that access to music is essentially free and unlimited anyway. I’ve exactly zero qualms with that, especially being as voracious a musical consumer as I am whenever I’m not busy creating it; so that’s all totally fine by me. If anything, it’s provided so many more mechanisms of sharing and discovery; and that, my friend, is my true ulterior motive in literally giving away all my work: it’s for me to share my craft and passion, and for you to discover, peruse, and enjoy at your leisure.

It’s also worth mentioning that the other perk of subscription to my regular correspondence is that you’ll get early access to everything; much as with this particular release, you’ll receive the tunes at least week (if not more) before they become available anywhere else (if they leave the vault at all).

All’s you have to do is let me know where you’d like me to send everything to, introduce yourself, and I’ll immediately redirect you to a secret link with the aforementioned videos and music downloads. You’ll also receive an email with another secret link to my hitherto existing catalogue of spiffy content pertaining to the other most recent releases (feel free to bookmark the latter, as that’s the one I’ll be updating as I make more).

As with everything else I have to offer, it’s an invitation, never an expectation… and I truly, sincerely hope you opt to join me on a collective creative journey.

I WANT THE GOODS!