Previously you’d heard n’ seen the final product of a tune that’s essentially been in development for almost a decade before reaching its final form.

In this chapter I’d like to let you in on the conceptual evolution of the song, from the early roots of ideation to a previously released (but since redacted) version that’d come out a few years after the very first demo had appeared on my old hard drive. You’ll also get to listen to said demos, of which there are three distinct stages. Finally, we’ll touch on the creation of the artwork and see the several phases that’d ultimately culminated in the finished product.

A quick aside worth noting is that the original idea had spawned in my head in late December of 2011, however, the demo files date January of 2012; I can’t recall the specifics of why, but it’s entirely likely that “File > Save As…” had something to do with it — based on how I’d used to organize my production session files back then, any drastic revisions would be saved as new files for back-up purposes (as some software was a tad less sophisticated in terms of automatic back-ups). Anyway, not important.

By mid-January 2012 I’d had the original arrangement all sorted out, and mapped out via MIDI using drums and synths. A week or so later I’d recorded all the guitar parts and completed the first cohesive mix.

Fast forward to August 2016, when, after returning home from the Shambhala Music Festival (where I’d become enamored with the idea to finally take a serious crack at producing electronic music, which had previously daunted me), I decided to try to reappropriate the old, otherwise unused demo track, remix it, and layer some more electronic components into it. Effectively, it became one of my earliest attempts at fusing metal with drum and bass, while still using the same tools I’d employed in the many preceding years of rock and metal production (conversely, its successor, “Moonland”, was created in a completely different DAW with an entirely new instrumental toolkit).

I couldn’t honestly tell you where the title, “Electric Space Kitten” came from or what’d inspired it — its origins are now long forgotten, but I’d wager that I just dug the word combo and figured it’d make for adorable artwork (hence why I’d Photoshopped my then-girlfriend’s cat into a spacesuit with lightning bolts n’ such).

Full disclosure: I’d spent many hours scrubbing through old hard drives and archived files trying to find the original song master for the 2016 version, but unfortunately it’s completely M.I.A. and likely no longer exists (or if it does still exist, it’s on my old now-dead PC, whose resurrection I’m admittedly hesitant to throw money at). Even the original Cubase production session has since become corrupted (due to old plug-ins being no longer compatible with current operating systems and thereby unable to load), and I couldn’t salvage all of it. What I could recover, however, were the original audio stems (with the exception of the drums), and using those I was able to remix and remaster it (again), while doing my utmost to retain what I could recall from the tonality and feel of the 2016 version.

So there’s that. You might find it kinda neat to listen to the four track versions in succession to literally witness the evolution of my production chops over the last nine-plus years. You might even find the original arrangement more to your liking than the polished final product — I’ve certainly found that with artists that I’m a massive fan of, where I dig some alternative version better than the track the artist had ultimately chosen as their primary release.

Now onto the artwork:

As you may already know, before I took up the mantle of forging tunes, my primary artistic pursuit was drawing and graphic design — from sketching cat comics as a childling to designing logos and album art in adulthood, that was my thing. Now, I’m nowhere near confident enough in my drawing skills as I am in my music production, which is why I’ll usually outsource any sort of detailed hand-drawn artwork to my partner-in-crime, ‘Becca (aka loonameadows — check out her dope portfolio here). This time around, however, we’d partnered up on conjuring the Electric Space Kitten, first with my sketching out the idea via the good ol’ pen-n’-paper approach, and later replicating it on an iPad in ProCreate. I did all the original outlining, and later ‘Becca went in to fine-tune my sloppy line work and add shading/detail. Finally, I’d dumped the results into Photoshop to add the space background and text. 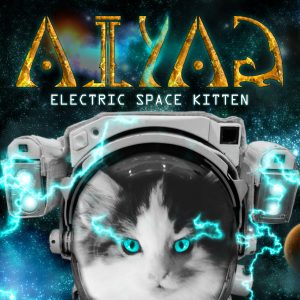 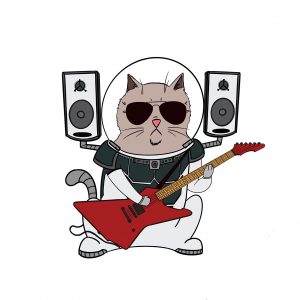 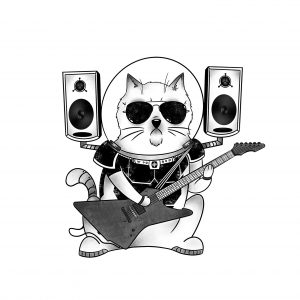 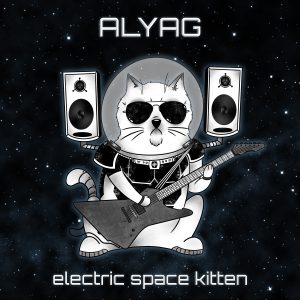 All right, that’s about the gist of it! Ya dig?

Next we’ll delve into the many musical layers of the track, where I’ll let you in on all my production tricks n’ secrets, and even show you how to play it on the guitar (if such is your jam).