Experience This Alyag Single Unlike Any Other!

Get an exclusive insider look into how "Electric Space Kitten" was created, hear unreleased alternate demo versions, learn how to play it, and more!

I’ve created an immersive deep-dive experience to tell a much more elaborate (than is typically customary) story behind the music, from inception to finalization, and you’re cordially invited to join in! 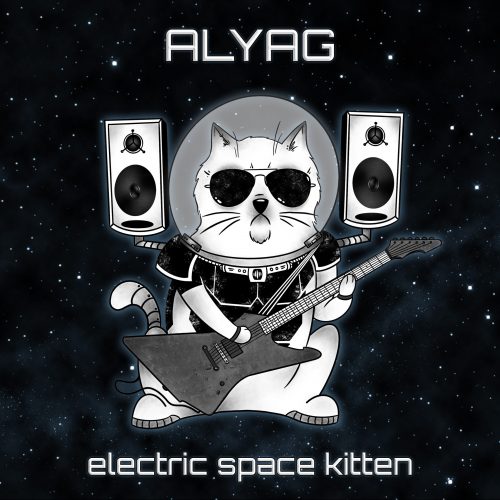 A lot (if not most) of artists produce a single, or an album, or what-have-you, upload it to the digital streaming platform of your preference, and cruise on.

And while it’s cool n’ all that the tunes get unleashed into the aether, the consequent flip-side tends to be that there’s little to no resulting dialogue ‘round the meaning behind the music, nor the sharing of the personal stories that’d inspired the tracks.

Hence why I’ve made the release of my metal drum n’ bass single, Electric Space Kitten, more than just a run-o’-the-mill, blast-it-out-across-teh-interwebs-n’-see-what-maybe-happens sort of event.

I really wanted to blow it up well beyond just a single track release, and paint — through words, images, almost an hour’s worth of video, and then some — a detailed picture of what this song is all about. It’s actually quite safe to say that I’d spent just as much (if not more) time crafting all of the bonus content as I did making the music itself.

There’s tremendous amounts of intent behind it, and, although on paper it’s heavy melodic instrumental dance music, there’s kind of an intricate story behind it, and that’s precisely what I intend to elucidate to you with this entire thing.

It may potentially come off as a tad audacious, but I truly aim to effectively tear down the walls that typically exist between the artist and generous listeners, and instead bring all together in a virtual launch experience, delivered straight into your inbox over multiple days.

Immediately upon sign-up, you’ll receive a secret link with detailed insights into the story, inspiration, conceptualization, and the creation processes that’d ultimately led to the song’s final rendition. You’ll see exclusive in-studio video diaries, riff breakdowns, footage of the original artwork being made, hear the since-redacted early demo versions of the track, dive deep into some of my favorite audio processing chains and sound design tricks, and then some.

And the best part?

I wanna share it with you for HECKIN’ FREE. All of it — from the very first demo I’d conjured the original morning of, to the final product that’d actualized almost a decade later, along with all the extras. I truly, sincerely, hope to see you there.